Compete for a Cause

Despite being in their 30's and eating a diet comprised mostly of pizza pockets, they describe themselves as "freak athletes" and in their "athletic prime". As such, they have decided to challenge themselves against anyone in our community in a variety of activities and sports. But, this challenge is very different, and comes with some very high stakes that give YOU the opportunity to make a big impact in our city.

Starting in June, these "freak athletes" (and some of their friends) will be taking on anyone who has the guts to challenge them in a sport/activity of their choice. The activity will be organized and officiated by our friends at the YMCA Okanagan. If you beat them, the Stober Foundation will donate $5,000 to a charity of your choice! But, if you lose, these guys might just spend that money on pizza pockets.

So gather some friends, choose a sport, and apply to Compete for a Cause! Your city, and their egos, need you now more than ever!

Do you think you have what it takes to beat these athletes in an activity/sport and win $5,000 for a charity of your choice? If so, apply today and let's Compete for a Cause! 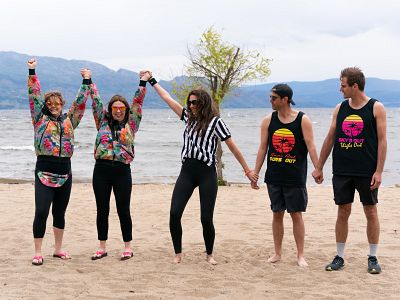 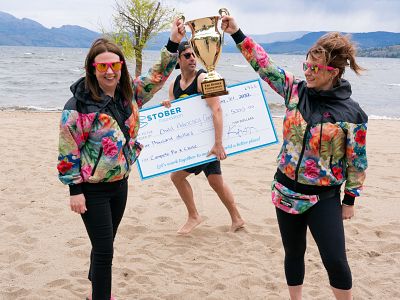 I want to start off by saying that our challengers goalie equipment appeared abnormally large and possibly not to code, and the outcome of this particular challenge is currently under protest. That aside, we were thrilled to have had the chance to compete against a pretty amazing human in Danica Brown. Danica, an accomplished local hockey goaltender, challenged us to a breakaway shootout challenge in hopes of raising  $5,000 for their charity of choice (SPCA). The challenge got very real and so too did the inaugural challenge of Compete for Cause!

Compete for a Cause is simple. Each month me and my team of "elite" athletes will show up to our local YMCA. Once there we will take on a team (ideally you and your friends) in an activity that will be randomly chosen, organized, and officiated by our friends at the YMCA Okanagan. If you beat us, the Stober Foundation will donate $5,000 to a charity of your choice. But if you lose, we might just spend that money on pizza pockets. So step up or step aside!

The Next Generation of Family Philanthropy

Our family foundation was created to help those in need. We have been tremendously blessed to be in  the graceful position to help others. As a family, we need to come together and adapt in order to provide support and opportunities for change.  In doing so, we can help others become whole, better their circumstances, their lives, and ultimately the lives of so many others through their success. Let us steward with grace, effectively and with great impact.